Mild sensation of warm breeze, indistinct chatter in the hostel behind, and an isolated playground in front. I swayed on the swing, in the shade of the building, wondering what to do today.

It was a week ago when I along with few of my friends planned to shoot a short film, but due to some drawbacks, we left the plan and waited for some profound outcome. Everyday seemed similar to Sunday that the familiarity became presumptuous day by day. I was about to dive in the realm of thoughts and then, “Hey…! Bro, You should see this, Its……. the solution” yelled Ashish from the window, with a sparkling gleam of ecstasy in his eyes. I ran up to the hostel with amazement. 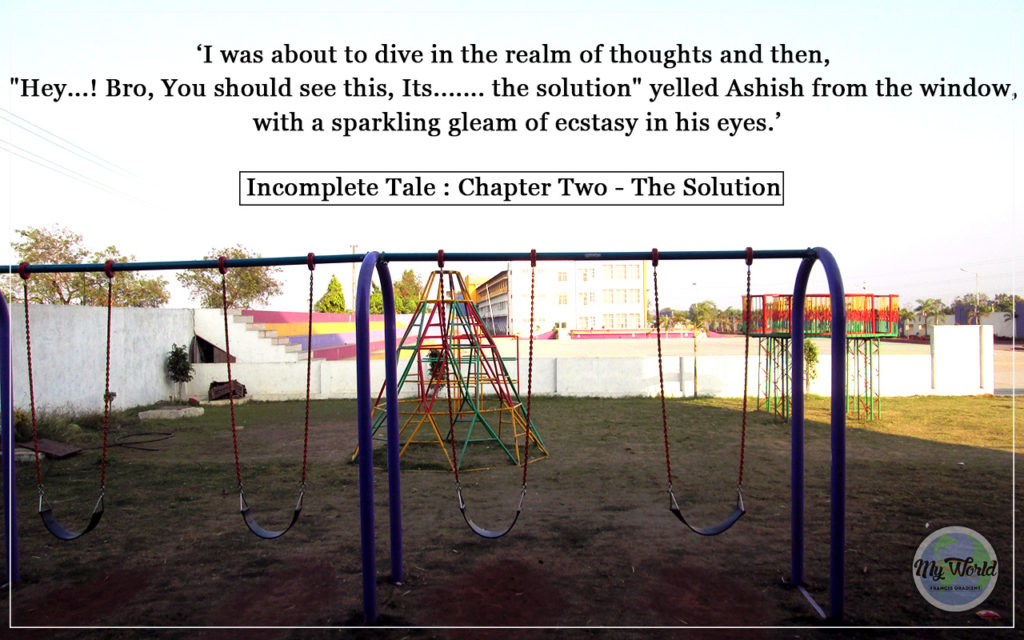 Swing in the playground of boys hostel.

When I arrived in the room he closed the door avoiding any complications. I gazed at the calendar in-front of me it was 19th May 2013. He then lead me towards his cupboard, unlocked it and rummaged through the clothes retrieving a Camera (Cannon Power Shoot A2300). I was speechless with the congestion of whirling ideas inside my brain. I took the camera in my hands carefully, explored it a bit and I knew what had to be done.

That night Ashish, Manish, Niraj and Myself gathered in our room (G3 – Ground Floor Third Room), and discussed to resume the plan. Now with a camera in our hands the most feared risk aroused was to avoid it from the sight of Jailers a.k.a Hostel Deans. Finally the Microphone, Camera & Studio (I’ll explain it later) were striked out from the ‘Checklist of Required Stuff’, and the remaining were,

In the coming few weeks we had solution for every point on our checklist, well not the perfect ones but still manageable solutions. It took great efforts and involved highly risky tasks which would leave us expelled out of the school but still some how we managed to accomplish everything as planned. Though it seemed risky but the thrill and excitement in the tasks were at the whole new level.

Nothing worth having was ever achieved Without Effort

The framework of the script was completed, it demanded Green Screen in order to add some special effects in some scenes. A discussion was held in our room and I offered a bit of info on Green Screen, initially we thought to use a white/blue/green cloth or a bed-sheet from our room mates, but we found that the bed-sheets were too small and wavy probably a seamless sheet was hardly available in the hostel.

Ashish offered some Intel about the stadium storeroom of our campus, and that was the greatest thing we longed for. According to him underneath the stadium stairs, there was a store room and it was filled with all sorts of junk from the days of school construction and old non-functional hardware stuff, it was like we’d found an arsenal of precious stuff to utilize. That evening Niraj and Ashish went for a reconnaissance to the stadium storeroom and they discovered many things including a set of paint buckets, which cooked up a delusive scheme in Niraj’s menace mind to use the paint for the Green Screen. They returned to the hostel and that night he explained the strategy of fetching the paint buckets from the store room to the hostel without anyone noticing it.

Saturday, 25th May 2013; It was Sabbath and also the day to execute the plan to fetch the paint buckets from the storeroom. Niraj was sleeping in the hostel (It was not the part of plan, he was just sleeping that’s all), Ashish, Myself and Manish were with all the students at the church. The Church was commonly scheduled from 9:00 AM to 1:00 PM, divided in three sessions. Perhaps Ashish attended the first session and sneaked out of the church and went to the Storeroom under the Stadium Stairs, fetched the paint buckets which smelled awful and ran in the hostel with the paint, as the way was cleared. As the next session was complete I too sneaked and rushed towards the hostel, as I arrived I directly went to the First Floor last room (which was empty & commonly used by the students to dry clothes also was going to be our studio i.e the explanation of studio from the strike list), it was an empty room with metal wires tied from end to end on the opposite windows facing each other, the wires were used to hang cloths for drying but were vacant since summer classes started, a study table was mounted in the wall at the corner of the room, the floor was smudged and few rugged clothes were scattered around.

Ashish was sitting on the side mounted study table with two buckets of paint beside him and a devilish grin on his face. Suddenly a shout echoed on the corridor,”Hey who’s there?” followed by strikes of sticks, and heavy footsteps approaching. The grin on Ashish’s face faded off, my heart beat started to accelerate, I hushed at Ashish and signaled him to hide the paint buckets in the corner, covering them with some ragged clothes. And then I peeped through the door, the horrific sight of Prasad Sir approaching, laid through the small gap of the door. I hid behind the door with Ashish, preparing for the worst case scenario, the foot steps grew louder along with echoing strikes of the stick. Each second seemed to be equivalent to an hour, we were sweating due to the heat and tension trapped in the room, a rustle of excuses processed in my mind, it was like I was using 98% of my neural processing power. My senses grew keener, the dust floating in the sunlight from the window seemed to slow down, distant noise of vehicles on the highway resonated in my ears. A loud bang on the door and everything rebounded to a halt, 0% neural processing power.