The auditorium was filled with the students of the school, attending the Divine hour on that bright Saturday afternoon. I and Ashish hid behind the door of 12th room (a.k.a F12) first floor in the hostel, horrified by the strikes of the sticks and heavy footsteps approaching towards our room. Suddenly there was loud bang at the door, for a mere second it felt as if the time stopped still highlighting the horror which awaited beyond that door.

The door shivered and screeched open rebounding towards us. A well polished shoe appeared at the edge of the door, and the echo of the footstep faded away slowly. I gazed at the shoe, held my breath and closed my eyes. For a moment I heard a distant familiar voice (More like a howl) which caught our attention, I opened my eyes looked at the edge of the door and the shoe had disappeared with evanescent footsteps. “Thank God..! He’s on time”, whispered Ashish. After few minutes when everything calmed down, I took a deep breath and exhaled with de-stress, stood on my numb feet, tumbled towards the mounted desk and sat on it. Ashish opened the paint bucket, an awful stench of rotten eggs rushed from the bucket. I told Ashish to continue with the task, meanwhile I’ll go and check the situation outside (It was just an excuse to escape from the room filled with that horrible smell). 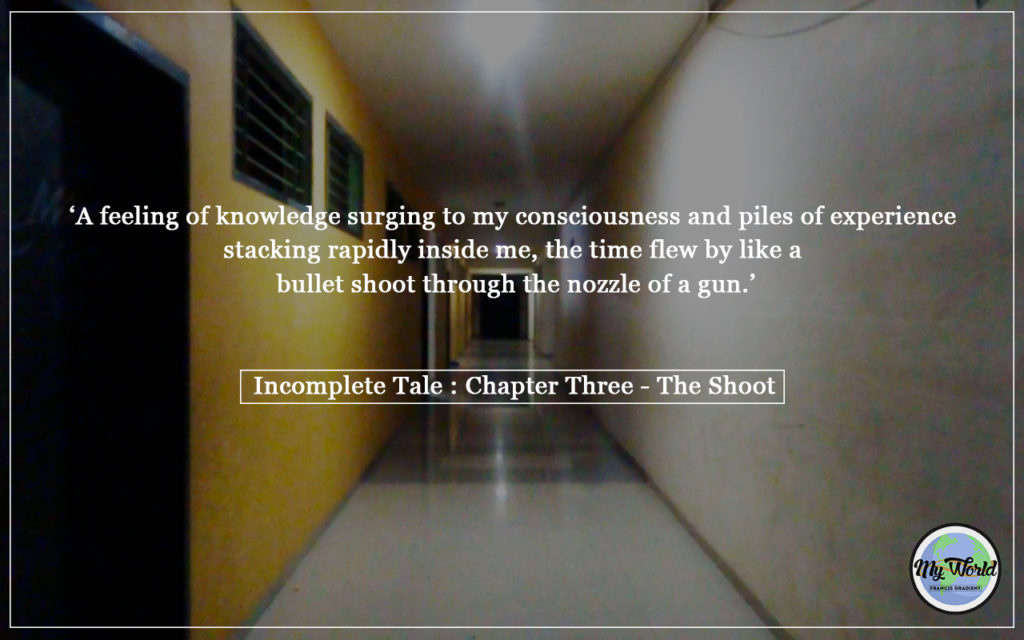 The Corridor of the First Floor

The corridor was empty I descended to the ground floor with caution, walked towards G3 (Ground Floor 3rd room, our boarding room at the hostel), where I found Manish in state of exhaustion and Niraj in a slumbering state(He was still sleeping not realizing he had tough luck that Sir didn’t notice him). Manish then filled me in with his side of story, i.e how he followed Prasad Sir from the auditorium to the hostel and how he distracted him with weird howls (We knew it was him when we heard those howls, so… creepy) when Sir was about to enter F12 and how he concealed himself in one of the bathrooms after the ruse. Subsequently I woke the Sleeping Demon and we walked to F12 where Ashish had made all the preparations and the pungent smell had vanished by then. Thus every afternoon after the class ended, we started to paint the wall which was right in-front of the door in F12, initially the paint on the wall seemed uneven, so a second layer was applied. The painting session lasted almost for a week, turns were assigned to each one of us for the painting, eventually the day came when we had our own Green Screen large enough to shoot a large CGI scene.

To learn something new, you need to try new things and not be afraid to be wrong.

The Summer Classes were about to end so we were running out of time. It was the last week at the hostel, during which we rushed our shooting plans and shoot scenes at various locations i.e in the school, at the hostel corridor, in our room and in the F12. We’d a camera with low quality and the freedom of shooting only during the night hours which worsens the video quality, it wasn’t satisfying at all yet we enjoyed each and every moment of this lame shoot. There was an incident when we risked the camera at an extent that it could’ve shattered into pieces. That day Niraj narrated the script in which a scene had to be shot where the protagonist (Sherlock Holmes) is jumping from the second floor and falling on the ground (Of-course we weren’t going to throw someone from that height), instead of a character jumping from the second floor, we planned to shoot a FPV Shot (First Person View – A scene including the perspective from the character itself using a camera instead of the actor). Ashish went pale after hearing the plan but we cheered him up by giving assurance for the safety of his camera. For the support of the camera Niraj fetched a long bamboo stick and I had a fray roll of kite thread. After that we integrated the bamboo stick with the kite thread to form a mechanism which worked like a fishing rod, on the other end of the thread the camera was tied with a protection frame on it. The FPV Camera setup was ready and then we went to the Second Floor 3rd Room (a.k.a S3) meanwhile Ashish was below the point from where we were going to launch the camera, I held the stick accompanied by Manish, Niraj was at the window through which the Camera ought to be launched, each one of us were on position. Niraj started the recording set an angle and with a countdown of three he launched the camera from the window, I held the stick tightly and Ashish was hoping that everything goes well. It flew by the first floor and then the ground floor and slowed down with the tension of the thread as we recoiled the thread and then tried few more shots for a better take. After each launch we checked the footage, it was all messed up and blurred. Not a single take was that good enough to be used in the film. A huge disappointment thrashed our work. We withdrew chasing the remaining script.

That evening I sat in F12 recollecting all the adventures and difficulties that we went through, the disappointment was burning my passion and work into flakes of embers, a fierce desire of knowledge and experience besieged me. I looked at the open window, mesmerizing scenery of setting sun soothed my moist eyes, the rays pierced through the clouds and an orange shade of light flushed at the horizon of twilight.

Time is the longest distance between two places.

A feeling of knowledge surging to my consciousness and piles of experience stacking rapidly inside me, the time flew by like a bullet shoot through the nozzle of a gun. People moving at a warp speed, days passing by with the sun sinking into oblivion followed by the moon trapped in a loop, weeks ticked away with each second. I was dazed by the weird feeling of perplexity, as if I was stuck in a Time Lapse.