A comforting feeling of something rolling on my hand which felt relaxing and calm. I hardly opened my eyes and looked at my hand, as usual Bhupendra was drawing doodles on it with a ballpoint pen. Well it was the last period, but the English teacher didn’t came so it turned up to be a proxy class. Sir was sitting on the chair while the students were writing some assignments. I gazed at Bhupendra, he schlepped the pen on the book and started to overwrite on the words which he already wrote before, pretending he didn’t had anything to do with the doodles on my hand. Without saying anything I ignored him, and dozed off.

After sometime the bell rung then we had the closing pray and then the students started to move out. I packed my bag, donned it and walked out of the class with Niraj. It was Friday, 10th May 2013 pinned on the noticeboard, “Friday, So its Sabbath (a day of religious observance and abstinence from work, kept by Seventh Day Adventists) today, we shall execute the plan tonight as discussed”, muttered Niraj. I nodded concurring as we walked towards the boys hostel.

Plans are of little importance, but planning is essential.

Preliminary Summer classes were in session for 10th and 12th class while rest of the school was on the vacation. Our schedule covered 3 to 4 hrs of the day, thus we’d tons of free time up on our sleeves, therefore we spent that time in reading books (Not the ones from our academics but non-academic books from library like comics, novels, etc. Here’s one incident on the first book I bought from there. Click Here), playing board games, watching movies or listening music (known to be felonious in the hostel so the students concealed away themselves with a patrolman watching over them).

One fine day Niraj (One of my friend) came up with an idea of shooting a short film w.r.t a novel entitled as Sherlock Holmes which he was reading recently. Eventually I contributed to his idea and we presented it to our friends and as expected they agreed to it, and the faction of Short Film began with four of us; Niraj – The guy who came up with the idea and well experienced in filming criteria, Myself – Supporting the idea with my skills in video editing and technical stuff, Ashish – This guy was a punchbag for us though had great skills in technical stuff, Manish – The guy who accompanied us with all the criminal activities ‘The Crime Partner’. That’s the team we needed the most to execute the plan. 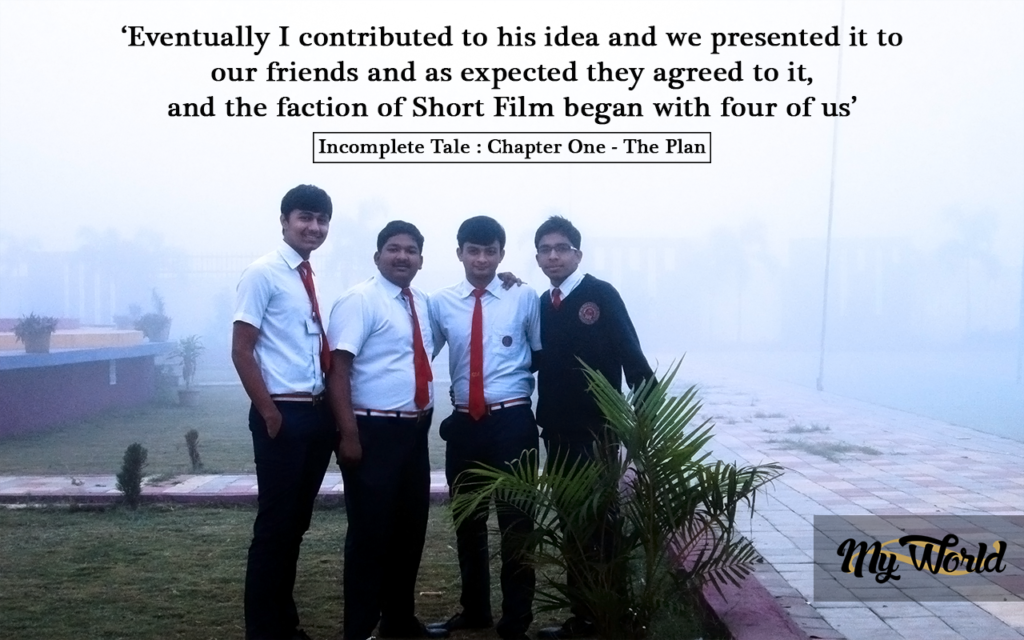 One pleasant Sunday we gathered up in our room when no-one was around and framed the blue print to initiate the plan of filming. While planning the blue print we realized that the idea of shooting the short film was not going to work, it had too many drawbacks like:

Due to lags in the plan we slid it aside and expected a solution in the coming days.

I like the way you write. Reading your words is like listening to an old friend who is recounting his adventures. It feels warm and genuine. I am looking forward to reading more from you.